It’s that time of year again. The balloons have completed their first race of the season, and the mayhem of Balloon Race weekend is underway. Who would’ve thought a couple of weeks ago when we were praying for temperatures below 90 degrees that we would be dealt this slate of fall weather to enjoy the best of the best?

Growing up, I have so many memories of Balloon Races past. One of the earliest is spending Saturday morning on a pallet in the driveway, snuggled up watching the balloons float overhead. I also remember my Dad’s first flight and him being christened with an upside-down champagne toast in the field next to the balloon he rode in. (Oh, don’t worry. Aimee and I tried to recreate this same toast at home with water and plastic cups, and their is VHS evidence out there somewhere.) Aimee’s first flight came later with cousin Stephen, and mine was just a few short years ago one Friday morning Hare and Hound race. 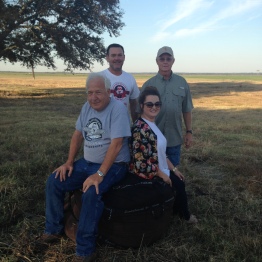 Pilot Bill Bussey was a dream to fly with.

So, instead of sharing a recipe today, sending everyone to the grocery store, and spending time stuck in the kitchen, I’m hoping everyone plans on spending the weekend out of the house. Natchez has a full weekend on deck, so get out there and chase a balloon!